Here you see the Champions2020 field. (In the background is the StreetSoccer field.)

4 soccer team squads of 20 players are included: 18 outfielders and 2 goalies.

One player has a yellow card, other player a bandage (injury).

MOVING AFTER THE PASSED BALL:
When you kick the ball, 1 player can move 2 steps towards the ball.
This player may not have touched the ball and must be or become closer to the ball than all teammates.

LINE GOALIE OR "PLAYING" GOALIE:
The goalie can make saves.
Chances depend on the speed of the shot and the distance to the path of the ball.

CHANGING THE BALL DIRECTION:
A player can "intercept" when the ball passes him closeby.

WARMING UP BEFORE SUBSTITUTION:
Substitutions can improve your team's field positions and put more emphesis on defense, midfield or attack.
First the player must warm up. To do that you can place substitutes at the sideline at the start of your turn.
As soon as there is a dead-ball moment, you bring in the players warming up.

FOUL AND FOLLOWING FREE KICK:
As manager you advocate fair-play ofcourse ... but you can't always control your players.
If your team can't get closer to the ball than their opponents, but your player can just reach the opponent nearest to the ball, then he commits a foul.

Game box and rulebook have 4 languages.
See the rulebook (6 pages). In each game are: 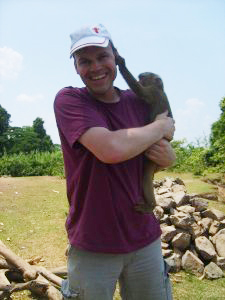